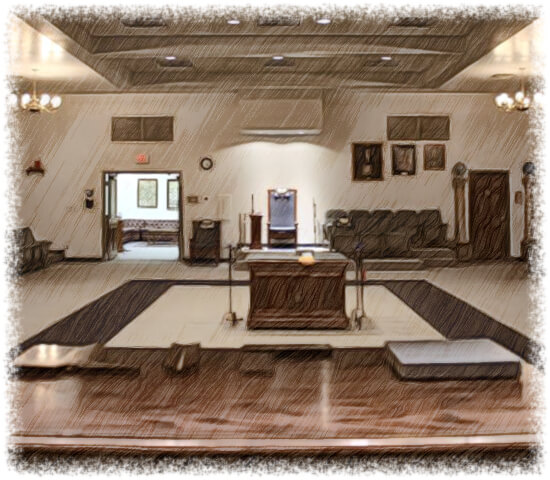 As a result of the interest manifested at this meeting, a permanent organization seemed desirable and a committee was formed to be in charge of future activities. Several intervening meetings were held, and early in 1914 the organization became known as the Ohio State University Masonic Club, and the Acacia Fraternity as such was no longer active in the affairs of the club.

Interest in the organization was increasing, and at a third banquet held in February, 1914, nearly 150 Masons were in attendance. At this time the members of the Starling-Ohio Masonic Club, an organization of Masons in the Starling-Ohio Medical College, were received as members. This new addition nearly doubled the membership of the club. It was at this meeting that, during the general discussion of the future policy of the Club, the first suggestion of a University Lodge of Masons was made, but no definite action was taken.

On October 2, 1914, a banquet was held with M.W. Bro. C.J. Pretzman, Grand Master of Masons in Ohio, as the guest of honor. It was again suggested that a lodge be formed. The discussion resulted in a motion empowering the chairman to appoint a committee to investigate the proposal.

At a banquet held on February 18, 1915, this committee reported favorably on the suggestion. Words of encouragement and advice were given by Bro. C.D. Cussins, District Lecturer and Past Grand Marshall of Ohio.

Prior to the next banquet held on April 9, 1915, the committee had canvassed the student body and faculty for charter members, with the result that over 80 names had been obtained. However, since many of the original signers did not have opportunity to secure demits from their home lodges, where such lodges were not within the jurisdiction, this charter list was reduced to 67. The committee also reported that the ten lodges of the jurisdiction had approved the formation of a new lodge. Bro. Pretzman, Bro. Cussins, and Bro. Ralph R. Rickly, Grand Treasurer of Ohio, gave inspiration and encouragement by their presence at this banquet. Bro. C. S. Plumb presided over the meeting and appointed a committee to present nominees for the stationed offices.

The first stated meeting of University Lodge, U. D., was held on June 11, 1915. The first Tuesday of each month was selected as the time for stated meetings. By appropriate action the Lodge approved arrangements whereby it would meet in the Hall of York Lodge No. 563 located at the Northeast corner of 5th Avenue and High Street, until the new York Temple at 1276 North High Street was completed, after which the Lodge would meet there.

Appropriate publicity pertaining to the meetings of the Lodge was soon deemed desirable and at the stated meeting on August 3, 1915, action was taken whereby notices of the stated and special meetings would appear in the Columbus Citizen and the Ohio State Journal.

September 28, 1915, was historic in the life of this new Lodge, for it was on that date that a special meeting had been called for 3:00 P.M. for work in the Master Mason degree. Bros. Charles R. Garvin, William Houston Robert C. Kaiser, Harry C. Ramsower, Ray M. Royer, and Roscoe C. Sloane were each severally introduced, obligated and raised. To them went the honor of being the first candidates to be raised in University Lodge. Two of these brethren, Bros. Charles R. Garvin and Harry C. Ramsower later served University Lodge as its Worshipful Master.

September 20, 1919, was an outstanding occasion in the growth of University Lodge for it was on that evening a reception was tendered to the Masonic students of Ohio State University. No formal invitations were sent out, but about 250 responded to the notices posted about the campus and in the class rooms. There were Masons from Puerto Rico, South America, and other parts of the world in attendance, giving the meeting a cosmopolitan atmosphere. The event was so successful that it was decided to hold similar gatherings in the future.

In 1924 it was proposed that University Lodge join with York Lodge No. 563 and Capital City Lodge No. 656 in the establishment of York Temple Country Club. Bros. Robert B. Stoltz, Charles R. Garvin, and Fred H. Vorhes were appointed to investigate the proposal. The favorable report of this committee was adopted, on April 1, 1924, and Bros. Edwin F. Coddington and J. I. Falconer were appointed by the Worshipful Master to represent University Lodge on the Board of Directors of York Temple Country Club.

On November 18, 1924, the first financial report of York Temple Country Club was received. What the report does not reflect are the countless hours and aching muscles of the Brethren who gave of their time in cutting trees and weeds, moving stones, putting in drains, and otherwise adapting the grounds.

With York Temple Country Club firmly established, it was only natural that the more athletic Brethren display their prowess in the field of sports.In 1926, Bro. H. E. Otting was appointed manager of the tennis team. He was succeeded by Bro. John Russ in 1927, and Bro. John W. Galbreath was named manager of the Recreation ball team and authorized to participate in the York Temple Country Club and City Masonic Ball League.

The name and fame of University Lodge has been carried by its members to far-away places. On September 20, 1927. Worshipful Brother Charles S. Plumb was authorized to present a Masonic apron from University Lodge to the Grand Lodge of England to be placed in the Masonic Museum in Freemasons Hall.

To perpetuate the memory of the Father of our Country and an outstanding Mason, it was proposed that the George Washington National Masonic Memorial be erected in his honor. To provide the necessary funds, each lodge in the United States was requested to contribute the sum of $1 for each member in good standing. On April 19, 1932, the Trustees of University Lodge recommended participation in this project. The recommendation was adopted and University Lodge was among the first to complete its contributions to this noble cause.

The year 1937 saw the beginning of a July 4th Annual picnic at York Temple Country Club under the sponsorship of the Masonic bodies meeting in York Temple. It was estimated at the time that over 4000 persons attended each if these annual affairs which were interrupted by World War II and never resumed.

University Lodge has a long and enviable record of benevolence rarely equaled or excelled by any other Lodge. It seems appropriate to name just a few. In times of economic stress the dues of distressed worthy Brethren were remitted, thereby keeping them in good standing and their Masonic membership intact. Financial assistance was given to deserving members, their widows, and orphans. Stock was purchased to aid other lodges in the erection of Temples. Christmas baskets were given to widows of Brothers and other needy persons. Contributions were made to the Ohio Masonic Historical Society, the Order of Eastern Star Hospital Circle, “care” packages, etc. Financial support was given to the Grand Lodge in its program of flood relief, military service activity, and many others. Perhaps the largest single benevolence is in supporting the Endowment Fund of the Ohio Masonic Home at Springfield.

In the beginning, most of the members of University Lodge were closely identified with Ohio State University. As the years passed and the works of the Lodge became more widely known, petitions were received from men in other vocations and today in a cross section of the membership, one finds represented the professions, the arts and sciences, the engineers, the clerk, the salesman, the business executive, the farmer, the storekeeper, and the laborer all meeting upon the level and acting upon the square of Freemasonry, working together for the promotion of the ideals of the Fraternity. The devastations several wars and periods of general economic stress and prosperity have not dimmed the aims and ideals of our esteemed Brethren who formed University Lodge. May that same spirit and love of Freemasonry which inspired them continue to influence the Brethren in tile years to come to the perpetuation of University Lodge mid the glory of the Supreme Architect of the Universe.

In the spring of 1913, Acacia Fraternity sponsored a banquet to which all Masons on the Ohio State University campus were invited. As a result of the interest manifested at this meeting, a permanent organization seemed desirable and a committee was formed to be in charge of future activities. Several intervening meetings were held, and early in 1914 the organization became known as the Ohio State University Masonic Club, and the Acacia Fraternity as such was no longer active in the affairs of the club.