Masons (also known as Freemasons) belong to the oldest and largest fraternal organization in the world. Today, there are more than two million Freemasons in North America alone. Masons represent virtually every occupation and profession, yet within the Fraternity, all meet as equals. Masons come from diverse political ideologies, yet meet as friends. Masons come from varied religious beliefs and creeds, yet all believe in one God.

Many of America’s early patriots were Freemasons. Thirteen signers of the Constitution and fourteen Presidents of the United States, including George Washington and Franklin Roosevelt.

One of the most fascinating aspects of Freemasonry is how so many men, from so many different walks of life, can meet together in peace, always conducting their affairs in harmony and friendship and calling each other “Brother.”

Freemasonry (or Masonry) is dedicated to the Brotherhood of Man under the Fatherhood of God. It uses the tools and implements of ancient architectural craftsmen symbolically in a system of instruction designed to build character and moral values in its members. Its singular purpose is to make good men better. Its bonds of friendship, compassion, and brotherly love have survived even the most divisive political, military, and religious conflicts through the centuries. Freemasonry is a fraternity which encourages its members to practice the faith of their personal acceptance. Masonry teaches that each person, through self-improvement and helping others, has an obligation to make a difference for good in the world.

Where Did Freemasonry Begin? 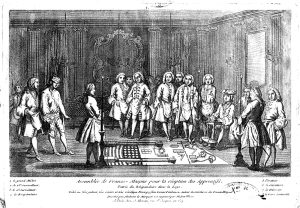 No one knows just how old Freemasonry is because the actual origins have been lost in time. Some scholars believe Masonry arose from the guilds of stonemasons who built the majestic castles and cathedrals of the middle ages. While others speculate its heritage is derived from the “Poor Fellow-Soldiers of Christ and the Temple of Solomon in Jerusalem”, otherwise known as the Knights Templar. In 1717, Masonry created a formal organization when four Lodges in London joined in forming England’s first Grand Lodge. By 1731, when Benjamin Franklin joined the Fraternity, there were already several Lodges in the Colonies.

Today, Masonic Lodges are found in almost every community throughout North America, and in large cities there are usually several Lodges. A Mason can travel to almost any country in the world and find a Masonic Lodge where he will be welcomed as a “Brother.”

What Do Freemasons Do? 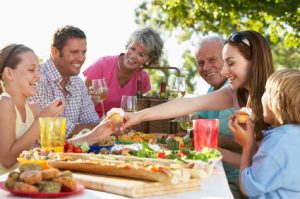 Beyond its focus on individual development and growth, Masonry is deeply involved in helping people. The Freemasons of North America contribute over two million dollars a day to charitable causes. This philanthropy represents an unparalleled example of the humanitarian commitment of this great and honorable Fraternity. Much of that assistance goes to people who are not Masons. Some of these charities are vast projects. The Shrine Masons (Shriners) operate the largest network of hospitals for burned and orthopedically impaired children in the country, and there is never a fee for treatment. The Scottish Rite Masons maintain a nationwide network of over 150 Childhood Language Disorder Clinics, Centers, and Programs. 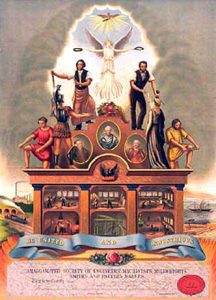 Many other Masonic organizations sponsor a variety of philanthropies, including scholarship programs for children, and perform public service activities in their communities. Masons also enjoy the fellowship of each other and their families in social and recreational activities.

What Is The Masonic Lodge? 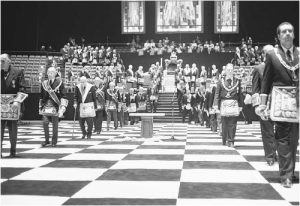 The word “Lodge” means both a group of Masons meeting together as well as the room or building in which they meet. Masonic buildings are sometimes called “temples” because the original meaning of the term was a “place of knowledge” and Masonry encourages the advancement of knowledge.

Masonic Lodges usually meet once or twice a month to conduct regular business, vote upon petitions for membership, and bring new Masons into the Fraternity through three ceremonies called degrees. In the Lodge room Masons share in a variety of programs. Here the bonds of friendship and fellowship are formed and strengthened. 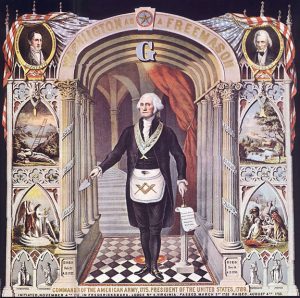 Men of Character and Integrity Join The Masons

Most are men who go about their jobs and professions with no hint they are Freemasons except for the way they lead their lives. Many are readily recognizable by name, face, or accomplishment. George Washington and thirteen other Presidents, eight Vice Presidents and forty-two Justices of the Supreme Court have been Masons.

So Who Are The Masons?

Masons are men of good character who strive to improve themselves and make the world a better place. They belong to the oldest and most honorable fraternity known to man. If you think you may be interested in becoming a member, you can begin by contacting a Lodge in your area or speaking to a Mason.

Who Can Qualify To Join?

Applicants must be men of good character who believe in a Supreme Being. To become a Mason one must petition a particular Lodge. The Master of the Lodge appoints a committee to visit the applicant prior to the Lodge balloting upon his petition. For more information about how to join, contact us.

In the spring of 1913, Acacia Fraternity sponsored a banquet to which all Masons on the Ohio State University campus were invited. As a result of the interest manifested at this meeting, a permanent organization seemed desirable and a committee was formed to be in charge of future activities. Several intervening meetings were held, and early in 1914 the organization became known as the Ohio State University Masonic Club, and the Acacia Fraternity as such was no longer active in the affairs of the club.